Experts in this subject field are ready to write an original essay following your instructions to the dot!

Human beings by nature draw their existence from family members who came before them. Some of the traits that people possess may have been directly or indirectly acquired from family lineage in which an individual belongs to. By definition, a genogram can be described as a family diagram which can be thought as an elaboration of the family tree (Ranguka, 2015). They provide a manner in which, at least, relationships between three generations can be modelled. Psychologists usually use genograms to come up with the characteristics of individuals. For instance, if your grandfather was a drunkard, there are very high chances that you may also develop a strong urge for alcohol. This paper seeks to delve into my own genogram whereby I will be able to describe some of the ethos of those people who came before me.

Background of the study

Genograms give us identity and seek to address questions and provide answers to occurrences. In psychology, they used by therapists to determine the relationships among family members. They help the psychologist understand and relate with the patterns that occur. In medicine and research, they are used to reflect the recurring symptoms. They help counselors to help those affected with drug addiction and substance. In family therapy programs individuals can track the progress of the relative and also recognize the need for change of certain habits (Ranguka, 2015). Part of the human problems and challenges can be solved through studying and evaluating the relationships of people in the family. The family genogram diagram will aid in understanding how family affects our well-being and how people can use the information to make informed choices about life. 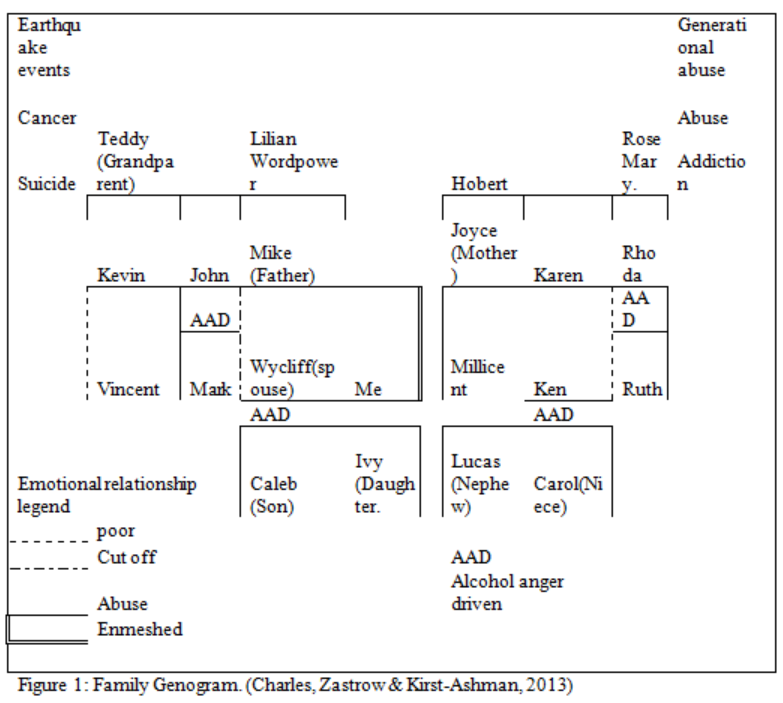 Figure 1 shows the flow of relationship from the grandparents to our children. The grandparents are Teddy, Lilian, Hobert and Rose. Kevin john and mike are brothers and Mike is my father. Joyce Karen and Rhoda are sisters and Rhoda is my mother.  The cousins are Vincent Mark, Millicent Ken and Ruth. I have a daughter, son, niece and nephew. The dashes represent the relationships that are poor, cut off abusive and enmeshed. Some family members have suffered from cancer and suicide.

John and Rhoda are alcohol anger driven. The relationship between Mark and his son in law is cutoff. While that of Kevin and Vincent is poor. Poor relationships contribute to depression and affect members of the family significantly.

Honest. Majority of the family members are honest and despite the differences we embrace one another in times of need. Truth has shaped as into better persons and we can always count on one another for support.

Generous. My grandparents were very generous with the resources they had acquired. They have always shared equally among us. The trend has been passed on to the next generations.

Reliable. All the relatives will always respond to calls and needy situations. They know the benefit of being there for one another and supporting each other in tough situations.

Lilian my grandmother is the strongest in the family. She has played a significant role in uniting the family members and bring them close. Conflict occur but her sprit to unite is has made the family to embrace and respect each other.

Psychosocial Factors that have shaped my life.

The psychosocial factors are used to influence a person either socially or physically. They differ among individuals. They include domains such as stress that affects someone after the loss of a loved one. Behavior traits change and the person affected requires counselling to have a productive life (Waterman, 1982). After the loss of a relative to cancer majority of the family members were greatly affected and it changed our relationships as some abused drugs to cope with depression. The effects of drug abuse were evident as some got hospitalized from severe dehydrations. The psychosocial factor helped me to learn the benefit of seeking help when faced with tough situations. We communicate often about our problems and the quality of life has improved.

Erikson’s psychosocial stage sheds light on some of the developments which happen to an individual in the process of exploring new ideas and the world at large. As indicated by Erikson's hypothesis of adolescence influence on identity, this stage is "expected to build up a fundamental feeling of trust in your condition and in the individuals who administered to you." At this stage, I was in the hands of my mom and my sitter, who I remained with for a considerable period. This stage I had warm child rearing and minding grown-ups around me reliably, for this situation, had some effect to my mental advancement. Amid this time in my life, my mom and I were moving around from Mexico to Klamath Falls, so I adhered for the most part to my mother, yet remained nearby with other relatives.

There is no unique story that I am aware of that would have been noteworthy to this stage, yet knowing how my mom would be defensive and manage what I could and couldn't play with, may have impacted me. One case is that for any essential family work, I would never dress myself, I generally needed to wear what my mom dressed me in and she generally did my hair, regardless of the possibility that it was a difficult haircut. Also, since my mother dependably put what others thought to start with, right up 'til the present time, mine and her appearance is entirely managed on our identity going to for that specific day (Waterman, 1982).

Contrasted with the past stages, I can vividly connect with this one. I am most similar to a debilitated onlooker, as per Erikson, as opposed to the entertainer (Waterman, 1982). "They encounter disappointment that abandons them with the feeling of mediocrity," which is most basic amid this age, which I essentially recollect. I would endeavor to take part, for example a kick ball game, yet sadly, I generally felt mediocre due to the "skippers" picking me near last, or even last at a few times. Humiliating minutes additionally developed the absence of self-assurance (Waterman, 1982).

According to Sigmund, personality development occurs in stages. According to him, childhood is the most imperative stage in our development. He posited that real development occurred at five years. Sigmund’s hypothesis supposes that there are three parts of the brain which determine the identity of an individual namely; sense of self, personal identity, and superego (Feist 1985). Many scholars in psychology have regarded this theory as Freud’s hypothesis simply because it places a lot of emphasis on mental condition of individuals. Effective cooperation between the key parts of the brain advance as a result of around five improvements which occur psychosexually (Feist, 1985). Recent decades however have seen Feist’s suppositions meet criticism from some quarters. This is mainly due to its sole attention on sexuality as the only driver of human personality development (Feist, 1985).

Freud's Structure of the Human Mind

As indicated by Freud, our identity creates from the communications among what he proposed as the three major structures of the human personality: the id, self-image, and superego. Clashes among these three structures, and our endeavors to discover adjust among what each of them "wants," decides how we carry on and approach the world (Feist, 1985). What adjust we strike in any given circumstance decides how we will resolve the contention between two overall behavioral propensities: our natural forceful and delight looking for drives versus our mingled inside control over those drives (Feist, 1985).

At this stage, I have not yet turned into a youthful grown-up, but rather am close, and the vital elements are darlings, companions, and work associations. These impacts decide hint connections, work and social lives. The negative results are wantonness and restrictiveness (Feist, 1985).

Once the last stage is finished, this stage is centered on kids and group. Adding to something demonstrates that amid this age classification, care and generation of kids is sound. Be that as it may, if things turn out badly, rejectivity is inclined to happen.

The last stage is clearly the late grown-up one. Towards the end, Erickson supposes that we as a whole attempt to clarify our lives, relating it to the world and society. The importance of our lives and reason we served by our life accomplishments. We spread our astuteness to our relatives which by one means or another satisfies the finish of our lives, ideally with little laments (Feist, 1985).

How Culture has influenced me

Culture is the shared system of symbols beliefs values attitudes norms and expectations of behavior. The imperativeness of culture in shaping an individual’s character cannot be downplayed. Technology is eroding culture and shared beliefs. People are blinded by what they see and hear from the press. The majority of the information is based on exaggeration and false statements. The risk of over-reliance on technology is evident in schools and public organisations. Students are bullied at school by what their fellow students believe and have heard through media. We have a generation of young children insecure about their physical looks. The low self-esteem not only damages the confidence levels but also affect learning. In ancient times, no one cared how they looked or dressed yet everyone was comfortable. There are however media houses that run programs related to culture. The programs are used to educate the young generation about the role of culture in society. Culture has shaped my identity and I can relate with people from diverse backgrounds because I understand that values are different and the benefits that are derived from respecting one another.

The role of family and the chain relationships that develop give psychologist information that helps them to understand why certain events occur in life. They can use the information to seek solutions that will help individuals affected and give them better lives.

Read also: Can I pay someone for essay writing for sale?- Yes! We will write perfect papers for you!

Rangka, I. B. (2015). Genogram and Narrative Counseling: An Approach for Helping Student to Find Direction of Career Choice.

Waterman, A. S. (1982). Identity development from adolescence to adulthood: An extension of theory and a review of research. Developmental psychology, 18(3), 341.

Nixxy is accurate and fun to cooperate with. I have never tried online services before, but Nixxy is worth it alone because she helps you to feel confident as you share your task and ask for help. Amazing service!

This sample could have been used by your fellow student... Get your own unique essay on any topic and submit it by the deadline.

Eliminate the stress of Research and Writing!

Hire one of our experts to create a completely original paper even in 3 hours!

A Reflection Paper on Sociological Theories

Most of the relationship and social activity shown by people in their everyday activities is due to the various sociolog...

The most critical factors of deciding his or her interactions with others and the general universe are individual charac...

Assimilation and pluralism are two concepts

Assimilation and pluralism are two terms that can be used to explain the relationship between groups. In assimilation, d...

It is difficult, unfortunately, to live without conflicts: in the corporate sphere, in daily life, in personal relations...

Lindsay is a freshman at a college where her older brother, Lance, who is a sophomore, is studying. As she finishes unpa...

Beauty Relationship
This sample is very popular! It's been downloaded over 59 times.

Get a Custom Paper